Corruption is a 1967 British science fiction horror feature film directed by Robert Hartford-Davis from a screenplay by Derek Ford (Don’t Open Till Christmas, The Urge to Kill) and Donald Ford. It was also released as Carnage and Laser Killer.

Luckily, Rowan has happened upon the secrets of the Ancient Egyptians and has harnessed the use of pituitary glands and a large laser (what Ancient Egyptians were doing with one of these is anyone’s guess) to restore her beautiful looks.

Alas, whilst on holiday, her face reverts to awful ghastliness and Rowan realises that the aforementioned glands must be from a live specimen, not dead; alas, for ladies of slack morals, this means he will be roaming the streets and relieving prostitutes of select parts of their innards.

What follows, as Rowan and his girlfriend connive to keep her looks pristine, is an ever-escalating spiral of depravity until they are both rumbled and it becomes a fight to the death…

Corruption may well be the most eyebrow-raising British horror film of the 60s and despite the rather Austin Powers-like depiction of the sixties at the beginning (Hartford-Davis was a master of this, having already helmed the likes of Gonks Go Beat and The Yellow Teddy Bears) the film progresses to scenes you would never imagine featuring Peter Cushing, from surprisingly full-on snogging, nudity and plenty of savage killings.

European prints of the film featured more nudity along with a scene of Cushing’s bloody hands groping a victim’s breasts. The tone of the film is oddly downbeat, no Hammer comedy klaxons or sunrise endings here.

Cushing delivers the most manic performance of his career, surprisingly believable and an excellent foil to his girlfriend, played by Lloyd, who you lose sympathy with pretty quickly.

The supporting cast is also excellent  – particularly the foul, weirdness of David Lodge – all thoroughly repellent and a suitable collective to sound the British fanfare to the end of the innocent sixties and welcome in the grey grime of the seventies.

Director Robert Hartford-Davies went on to direct other idiosyncratic British horror movies Incense for the Damned (1970) and The Fiend (1971).

On October 2nd, 2013, Grindhouse Releasing issued Corruption on Blu-ray  + DVD in the USA. The package features:

Directed with efficiency by Robert Hartford-Davis, Corruption is one of the unsung greats of British horror, appearing as it did right at the start of a shift in gears away from the gothic and into more contemporary, mean-spirited and graphic movies.

The screenplay, by exploitation veterans Donald and Derek Ford (who would make everything from gothic horror to skin flicks in their careers) is a masterclass in efficiency – the story trundles along so quickly, you have little time to question how ludicrous it might be, and the shift in gears with the introduction of the gang – a decidedly modern threat (just dig their Carnaby Street fashions!) against Cushing’s almost traditional mad doctor – is inspired.

“The standard of acting helps lift the film above being just another sleazy shocker. Lloyd is wonderfully effective as the cool model who transforms into a kill-crazed harpy, and Booth and O’Mara are great in their supporting roles […] Cushing is absolutely brilliant as the desperate and rather pathetic Sir John, horrified at what he’s been reduced to.” Jumble Sale Frenzy!

“A clinically nasty exploitation movie, derivative and gory and made with a complete absence of style.” Alan Frank, The Horror Film Handbook

Corruption was turned into a novelization by ‘Peter Saxon‘ 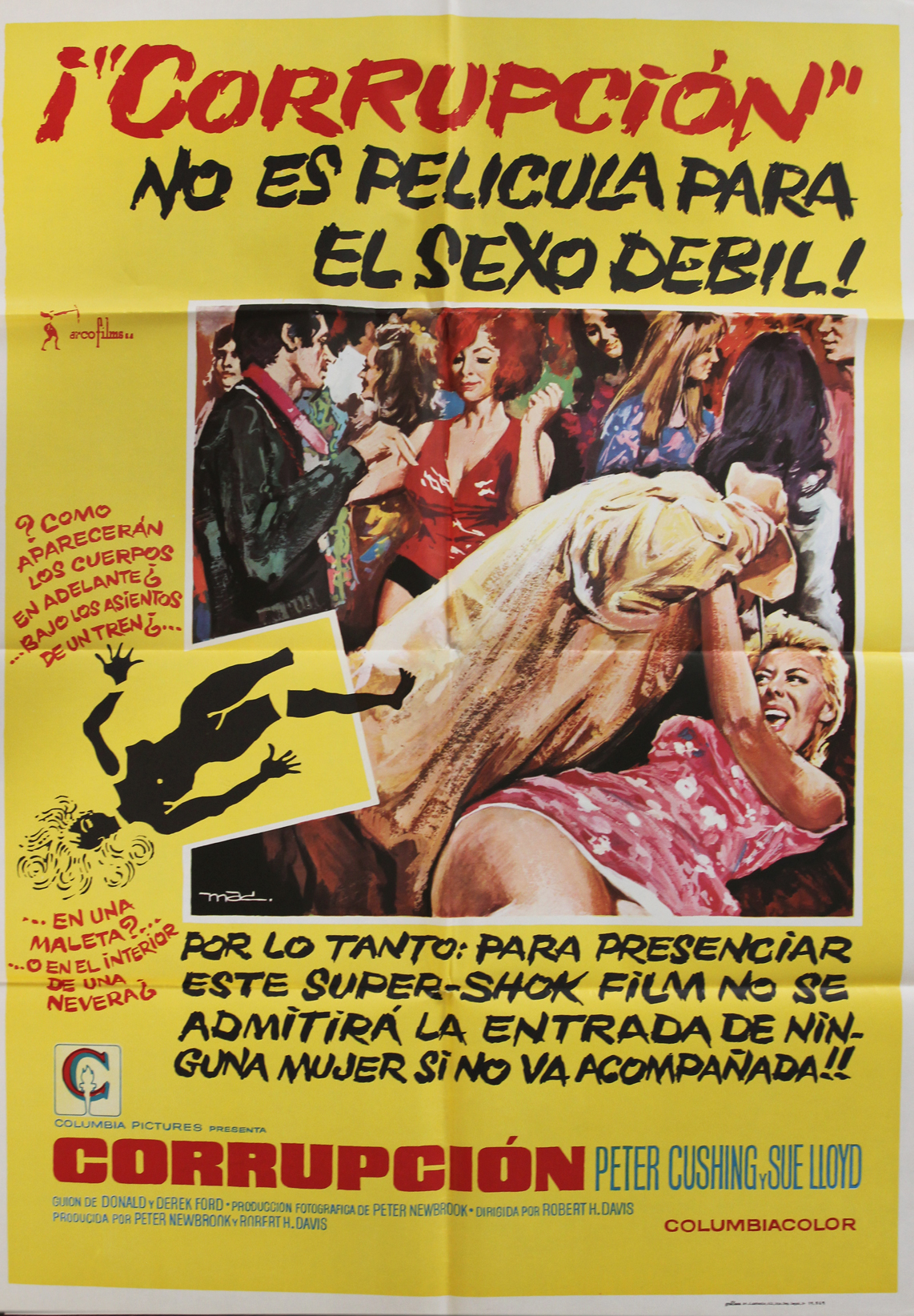 Read the original screenplay online via the Internet Archive

MOVIES and MANIA provides an aggregated range of linked cult movie review quotes from a wide variety of sources in one handy web location, plus a growing number of our own reviews and ratings.

We are truly independent but rely solely on the very minor income generated by affiliate links and internet ads to stay online and expand. Please support us by not blocking ads on our site. Thank you. We really appreciate it.

This website uses cookies to improve your experience while you navigate through the website. Out of these cookies, the cookies that are categorized as necessary are stored on your browser as they are essential for the working of basic functionalities of the website. We also use third-party cookies that help us analyze and understand how you use this website. These cookies will be stored in your browser only with your consent. You also have the option to opt-out of these cookies. But opting out of some of these cookies may have an effect on your browsing experience.
Necessary Always Enabled
Necessary cookies are absolutely essential for the website to function properly. This category only includes cookies that ensures basic functionalities and security features of the website. These cookies do not store any personal information.
Non-necessary
Any cookies that may not be particularly necessary for the website to function and is used specifically to collect user personal data via analytics, ads, other embedded contents are termed as non-necessary cookies. It is mandatory to procure user consent prior to running these cookies on your website.
SAVE & ACCEPT