The movie stars Max von Sydow (The Exorcist), Liv Ullmann, Trevor Howard, Per Oscarsson, Rupert Davies and Andrew Keir (Quatermass and the Pit). It was produced by Mel Ferrer and features a score courtesy of Henry Mancini (Tarantula).

Against a backdrop of a ferociously cold and foreboding Scandinavian winter, Salem (von Sydow) is seen escaping a castle-like asylum, clad only in a t-shirt and shorts. He returns to the home of his sister, Ester (Liv Ullmann), and her husband, Anton (Per Oscarsson), who had him imprisoned two years ago for an axe murder he didn’t commit.

Having staked out his family’s current situation he, incredibly, breaks back into the asylum to avoid detection and plots to seek his revenge. Salem makes regular sorties from his cell, killing along the way and implicating those who wronged him.

On the case is an old-school detective (played by Trevor Howard) who suspects that the clues which are been laid at the murder scenes are a little too straightforward. The tension is ramped up as Salem makes increasingly desperate attempts to frame those who were really responsible for the original crime but is everything really as it seems?

The Swedish title Papegojan, which translates as ‘parrot’, gives a clue as to one of the hidden stars of the film, a big-mouthed feathered chap who can’t help but tell everyone what he’s just seen. Hungarian director László Benedek (best known for the Marlon Brando-starring The Wild One) helmed this much-overlooked gem, a masterpiece of twists, tension and staggeringly bleak landscapes, stunningly shot by Henning Kristiansen (also the cinematographer of Babette’s Feast).

Producer Ferrer, better known as an actor in such toe-tingling genre movies as The Hands of Orlac, Eaten Alive and Island of the Fishmen, assembled a superb cast; von Sydow makes his appearance already with his legend secure as director Ingmar Bergman’s actor of choice but was only two years away from playing the most famous film priest ever in The Exorcist.

Similarly revered was Trevor Howard who, although a surprising choice for a foreign release, plays his role as a rather tortured detective with admirable restraint (in fairness, he had played a few coppers in the past). Less surprising is an appearance by Liv Ullmann, another favourite of Bergman and well used to starring alongside von Sydow; modern audiences will recognise Oscarsson from The Girl Who Played with Fire and The Girl Who Kicked the Hornet’s Nest.

Christopher Lee was originally pinpointed to play the role of Salem though it’s difficult to imagine this working convincingly; the part requires a great deal of acrobatic action and it’s hard to see how even with a stunt double, Lee could pull this off without eyebrows being raised. As he was unavailable, we are spared this dilemma.

Initially slated for filming as early as 1963, the intended American location and Steve McQueen (The Blob) frowning never materialised – though inevitably this film would now be better known, there is little doubt the intensity and atmosphere of the eventual release would be in a different league.

The scenes revealing how Salem escapes from the asylum are truly incredible and genuinely breathtaking. The frozen, gloomy backdrop, shot in Southern Sweden and Denmark, is a perfect pathetic fallacy, von Sydow was surely close to pneumonia at the end of filming (or maybe he’s just a good actor, eh?).

The Night Visitor is also notable for its unusual score by renowned Hollywood film and TV composer Henry Mancini (whose most famous composition is The Pink Panther). The music was arranged for synthesizer,  twelve woodwinds, organ, two pianos and two harpsichords, and Mancini achieved an unsettling effect by having one of the harpsichords tuned a quarter-tone flat.

NB. The ad line ‘If your flesh doesn’t crawl, it’s on too tight’ was also used to promote Canadian horror film Black Christmas (1974). 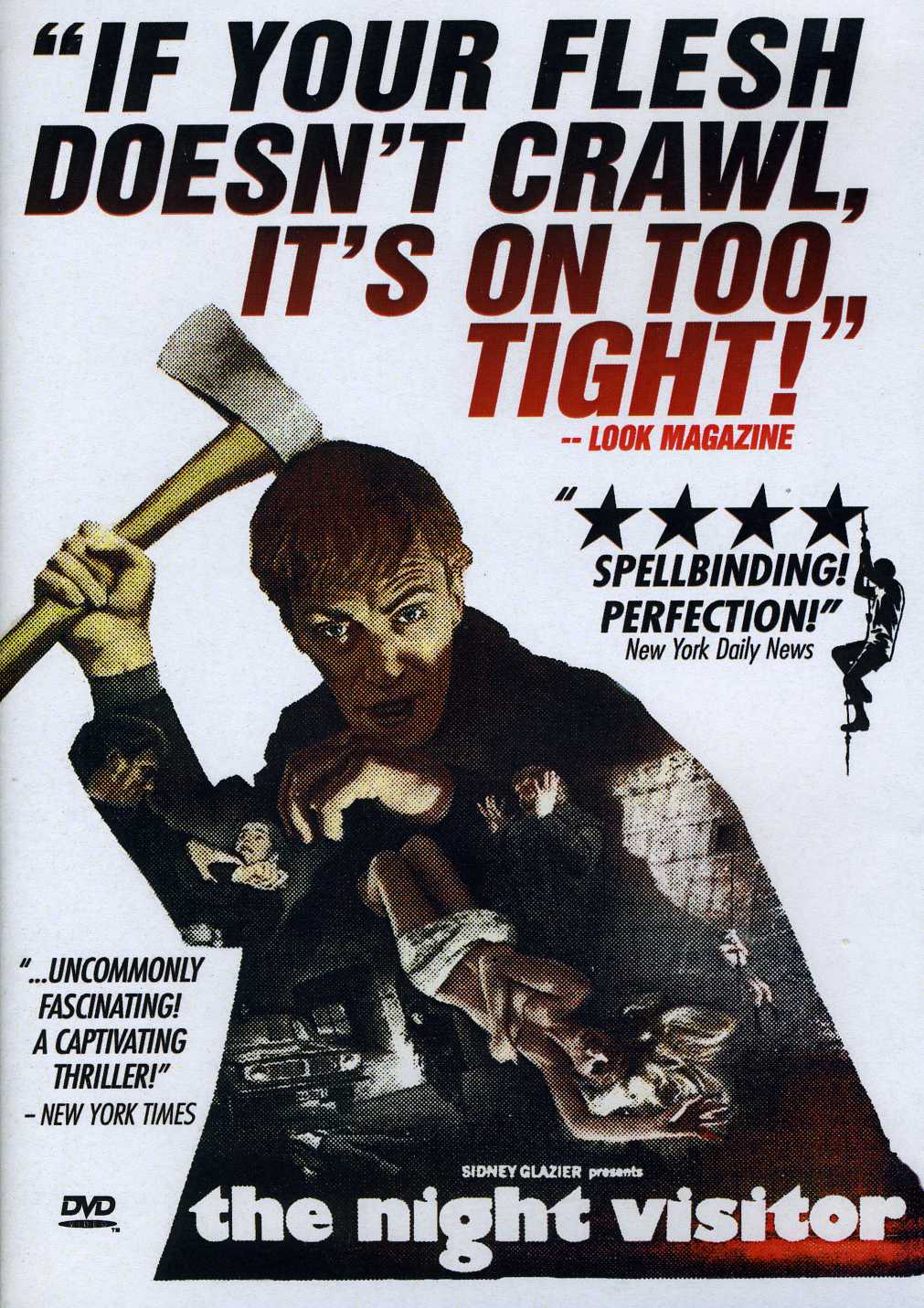 MOVIES and MANIA provides an aggregated range of linked cult movie review quotes from a wide variety of sources in one handy web location, plus a growing number of our own reviews.

We rely solely on the very minor income generated by affiliate links and internet ads to stay online and expand. Please support us by not blocking ads on our site. Thank you.