Trick-or-treating is a Halloween custom for children in many countries. Children in costumes go from house to house asking for treats such as candy/sweets (or, in some cultures, money) with the phrase “Trick or treat”.

The “trick” is a (usually idle) threat to perform mischief on the homeowners or their property if no treat is given to them. It typically happens during the evening of October 31. Some homeowners signal that they are willing to hand out treats, for example by putting up Halloween decorations outside their door. Others might simply leave treats on their porch.

In North America, trick-or-treating has been a Halloween tradition since the late 1920s. In Britain and Ireland, the tradition of going house-to-house collecting food at Halloween goes back at least as far as the 16th century, as had the tradition of people wearing costumes at Halloween. In 19th century Britain and Ireland, there are many accounts of people going house-to-house in costume at Halloween, reciting verses in exchange for food, and sometimes warning of misfortune if they were not welcomed.

While going house-to-house in costume has remained popular among Scots and Irish, the custom of saying “trick or treat” has only recently become common. The activity is prevalent in the United States, Canada, the United Kingdom, theRepublic of Ireland, Puerto Rico, and northwestern and central Mexico. In the latter, this practice is called calaverita (Spanish for “little skull”), and instead of “trick or treat”, the children ask ¿me da mi calaverita? (“can you give me my little skull?”); where a calaverita is a small skull made of sugar or chocolate.

Since the Middle Ages there had been a tradition of mumming on certain holidays. It involved going door-to-door in costume, performing short plays in exchange for food or drink.

The custom of trick-or-treating at Halloween may come from the belief that supernatural beings, or the souls of the dead, roamed the earth at this time and needed to be appeased.

It may have originated in a Celtic festival, held on 31 October–1 November, to mark the beginning of winter. It was Samhain in Ireland, Scotland and the Isle of Man, and Calan Gaeaf in Wales, Cornwall and Brittany. The festival has pre-Christian roots. Among Celtic-speaking peoples, it was seen as a liminal time, when the spirits or fairies, and the souls of the dead, came into our world and were appeased with offerings of food and drink. Similar beliefs and customs were found in other parts of Europe. It is suggested that trick-or-treating evolved from a tradition whereby people impersonated the spirits, or the souls of the dead, and received offerings on their behalf. S. V. Peddle suggests they “personify the old spirits of the winter, who demanded reward in exchange for good fortune”. Impersonating these spirits or souls was also believed to protect oneself from them.

The wearing of costumes, or “guising”, at Hallowmas, had been recorded in Scotland in the 16th centuryand was later recorded in other parts of Britain and Ireland. There are many references to mumming, guising or souling at Halloween in Britain and Ireland during the late 18th century and the 19th century. In Scotland, youths went house-to-house in white with masked, painted or blackened faces, reciting rhymes and often threatening to do mischief if they were not welcomed. In parts of Wales, peasant men went house-to-house dressed as fearsome beings called gwrachod, or presenting themselves as the cenhadon y meirw (representatives of the dead). In western England, mostly in the counties bordering Wales, souling was common. According to one 19th century English writer “parties of children, dressed up in fantastic costume […] went round to the farm houses and cottages, signing a song, and begging for cakes (spoken of as “soal-cakes”), apples, money, or anything that the goodwives would give them”.

Guising at Halloween in Scotland is recorded in 1895, where masqueraders in disguise carrying lanterns made out of scooped out turnips, visit homes to be rewarded with cakes, fruit and money. The practice of Guising at Halloween in North America is first recorded in 1911, where a newspaper in Kingston, Ontario reported children going “guising” around the neighbourhood.

American historian and author Ruth Edna Kelley wrote the first book length history of the holiday in the US; The Book of Hallowe’en (1919), and references souling in the chapter “Hallowe’en in America”;

The taste in Hallowe’en festivities now is to study old traditions, and hold a Scotch party, using Burn’s poem Hallowe’en as a guide; or to go a-souling as the English used. In short, no custom that was once honored at Hallowe’en is out of fashion now.

In her book, Kelley touches on customs that arrived from across the Atlantic; “Americans have fostered them, and are making this an occasion something like what it must have been in its best days overseas. All Hallowe’en customs in the United States are borrowed directly or adapted from those of other countries”.

While the first reference to “guising” in North America occurs in 1911, another reference to ritual begging on Halloween appears, place unknown, in 1915, with a third reference in Chicago in 1920.

The earliest known use in print of the term “trick or treat” appears in 1927, from Blackie, Alberta:

Hallowe’en provided an opportunity for real strenuous fun. No real damage was done except to the temper of some who had to hunt for wagon wheels, gates, wagons, barrels, etc., much of which decorated the front street. The youthful tormentors were at back door and front demanding edible plunder by the word “trick or treat” to which the inmates gladly responded and sent the robbers away rejoicing.

The thousands of Halloween postcards produced between the start of the 20th century and the 1920s commonly show children but do not depict trick-or-treating. The editor of a collection of over 3,000 vintage Halloween postcards writes, “There are cards which mention the custom [of trick-or-treating] or show children in costumes at the doors, but as far as we can tell they were printed later than the 1920s and more than likely even the 1930s. Tricksters of various sorts are shown on the early postcards, but not the means of appeasing them”.

Trick-or-treating does not seem to have become a widespread practice until the 1930s, with the first U.S. appearances of the term in 1934, and the first use in a national publication occurring in 1939. 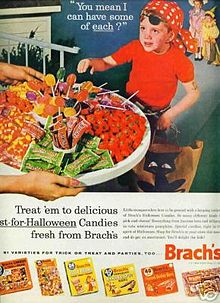 Early national attention to trick-or-treating was given in October 1947 issues of the children’s magazines Jack and Jill and Children’s Activities, and by Halloween episodes of the network radio programs The Baby Snooks Show in 1946 and The Jack Benny Show and The Adventures of Ozzie and Harriet in 1948.[32] Trick-or-treating was depicted in the Peanuts comic strip in 1951. The custom had become firmly established in popular culture by 1952, when Walt Disney portrayed it in the cartoon Trick or Treat, and Ozzie and Harriet were besieged by trick-or-treaters on an episode of their television show.

Although some popular histories of Halloween have characterized trick-or-treating as an adult invention to re-channel Halloween activities away from vandalism, there are very few records supporting it. Meanwhile, some adults, as reported in newspapers from the mid-1930s to the mid-1950s, typically saw it as a form of extortion, with reactions ranging from bemused indulgence to indignation. Likewise, as portrayed on radio shows, children would have to explain what trick-or-treating was to puzzled adults, and not the other way around.

Not unsurprisingly, in 2005, the National Confectioners Association reported that 80 percent of adults in the United States planned to give out confectionery to trick-or-treaters, and that 93 percent of children, teenagers, and young adults planned to go trick-or-treating or participating in other Halloween activities. In 2008, Halloween candy, costumes and other related products accounted for an estimated $5.77 billion in revenue.

Despite the concept of trick or treating originating in Britain and Ireland in the form of souling and guising, the use of the term ‘trick or treat’ at the doors of home owners was not common until the 1980s. According to one BBC journalist, in the 1980s it was still often viewed as an exotic and not particularly welcome import, with the BBC referring to it as “the Japanese knotweed of festivals” and”making demands with menaces”. Very often, the phrase “trick or treat” is simply said and the revellers are given sweets, with the choice of a trick or a treat having been discarded.

MOVIES and MANIA provides an independent aggregated range of previews, opinions and reviews from a wide variety of credited sources, plus our own reviews, in one handy web location. We rely solely on the very minor income generated by affiliate links and internet ads to stay online and expand. Please support us by not blocking ads on our site. And if you haven't already, why not scroll back up to the top of this post and rate this movie by clicking a star? Thank you.

Terror-Creatures from the Grave (1965) reviews and overview

Army of Frankensteins (2013) reviews and overview

The Basement (2017) reviews and overview

The Haunting of Borley Rectory – UK, 2018 – overview and reviews

The Curse of Sleeping Beauty (2016) reviews and overview

Lord of Tears (2013) reviews and overview

The Old Guard (2020) reviews and overview

The Addams Family (2019) reviews and overview

The First Purge (2018) reviews and overview

The Cured (2017) reviews and overview

The Old Guard (2020) reviews and overview

The Night Clerk (2020) reviews and overview

The Darkness (2014) reviews and overview

The Guest (2014) reviews and overview

The Devil’s Advocate (1997) reviews and overview

Warning: Do Not Play (2019) reviews and overview

I Know What You Did Last Summer (1997) reviews and overview

Other websites to visit