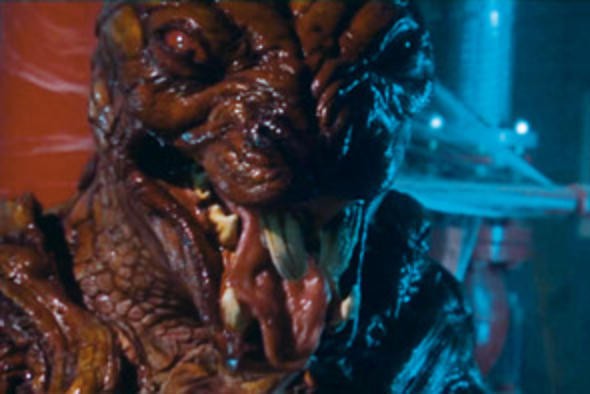 In Japan, a U.S. co-funded attempt to create a super soldier accidentally creates the Bacillus Virus, which gives people hundreds of black sores on their faces. That these sores look like someone took a laundry marker and just made dots is not really the point.

Their experiments mutates a lab rat into a seven-foot tall lab rat monsterwith baby walrus-sized fangs and a red rubber face frozen in a roller coaster expression of “Aiyeeeeee!” Other distinguishing features include red eyes (to convey aggressive behavior), sharp claws (a way to open cans of rat food in case there’s no rat food opener handy), and a head that looks like sunburnt meatloaf (though it really does go with the whole fangs/claws ensemble). What looks to be a giant brain stuck on its back could indeed be plastic. My research is inconclusive at this time.

The scientists wanted to make a soldier who would be impervious to chemical warfare and germs, but they couldn’t make themselves impervious to Nezulla, the rat monster, who wants to chew the fat with each and every one of them locked in the containment facility.

A double agent is sent in to blow up the place, thereby eliminating any evidence that could link them back to the virus that’s gooning people out. Soldiers, speaking both Japanese and money-in-the-bank English, are systematically made null and void by Sunburnt Meatloaf Head. But Nezain’t got time to mess around – when confronted with one soldier, he pushes him down! (That’ll teach ’em.) Another soldier triggers an explosive device and shoves it deep Nezulla’s mouth, but forgets to extract his arm. Nezulla, doing what mutated rats do, bites the arm off. No time to savour its deliciousness as the bomb goes off and Nezulla, alas, is no more.

But this train wreck of a horror/sci-fi movie keeps going even after its star power has been finely minced. So face-crunchingly bad is Nezulla – The Rat Monster (2002), train wrecked my evening. OK, not really. But close.