The Monkey’s Paw is a horror short story by W. W. Jacobs, published in England in 1902.

The story involves Mr. and Mrs. White and their adult son, Herbert. Sergeant-Major Morris, a friend of the Whites who has been part of the British Army in India, introduces them to the monkey’s paw, telling of its mysterious powers to grant three wishes and of its journey from an old fakir to his comrade, who used his third wish to wish for death.

Sergeant-Major Morris throws the monkey’s paw into the fire but White quickly retrieves it. Morris warns White, but White, thinking about what he could use the paw for, ignores him. Mr. White wishes for £200 to be used as the final payment on his house. Having made the wish his son, Herbert, is killed by machinery at the factory where he works. The couple gets compensation of £200.

Ten days after the funeral, Mrs. White, almost mad with grief, asks her husband to use the paw to wish Herbert back to life. Reluctantly, he does so. Shortly afterwards there is a knock at the door. Mrs. White fumbles at the locks in an attempt to open the door. Mr. White knows, however, that he cannot allow their revived son in, as his appearance will be too hideous.

Mr. White was required to identify the body, which had been mutilated by the accident. It has now lain buried for more than a week. While Mrs. White tries to open the door, Mr. White makes his third wish (for his son to be dead and in his grave), and the knocking stops. Mrs. White opens the door to find no one there…

Buy The Monkey’s Paw from Amazon.co.uk

In 2011, Ricky Lewis Jr made a short film adaptation:

The story has been adapted into other media many times, including:

A 1933 ‘lost’ US adaptation by RKO directed by Wesley Ruggles, Ernest B. Schoedsack

The segment “Wish You Were Here” from the EC Comics 1972 film Tales from the Crypt is an adaptation.

Bob Clark‘s Deathdream (aka Dead of Night aka The Night Andy Came Home) is inspired by the short story.

The Are You Afraid of the Dark? episode “The Tale of the Twisted Claw” is based on the story.

A variant of this story, using a genie in a bottle, was featured in The Twilight Zone episode “The Man in the Bottle”.

In an episode of The Monkees, titled “The Monkee’s Paw”, a nightclub magician sells the band a cursed monkey’s paw in revenge after they unwittingly force him out of a job.

The Ripping Yarns story “The Curse of the Claw”, first broadcast in 1977 and starring Michael Palin, is a spoof in the style of Monty Python, and is loosely inspired by “The Monkey’s Paw”.

In American backwoods slasher film The Prey (1980), one of the campers tells a version of ‘The Monkey’s Paw’.

Treehouse of Horror II – In the 1991 Halloween episode of The Simpsons, one of the stories is about how Homer gets a monkey’s paw that grants him four wishes. Each member of the Simpson family (except for Marge) makes a wish, which has terrible consequences. In a humorous twist, Homer gladly gives the paw to his neighbour Ned Flanders, only for Ned’s wishes to (apparently) go off without any of the usual consequences, causing Homer to grumble “I wish I had a monkey paw.

Five Superb Tales of Horror and the Macabre, 1972, Story Four, “Wish You Were Here” is an adaptation of The Monkey’s Claw featuring Richard Greene.

The 21st episode of the seventh season of the X-Files, Je Souhaite, is a remake of the monkey’s paw myth in which Mulder seems to solve the puzzle.

The book Prom Nights From Hell: a novel consisting of 5 short stories written by Meg Cabot, Stephenie Meyer, Kim Harrison, Michele Jaffe and Lauren Myracle. Myracle’s The Corsage is an adaptation of The Monkey’s Paw.

The Korean horror movie Wishing Stairs recasts the story with the family replaced by a trio of students at an all-girls school and the monkey paw replaced by the eponymous stairs.

“The Monkey’s Paw” was adapted as a radio play in 1979 as part of the CBC radio drama series Nightfall.

Stephen King’s Pet Sematary expands on the theme of bringing the dead back to life and includes a quote from the Monkey’s Paw.

In the novel The Dead Zone, by Stephen King, the character John Smith relates his newfound psychic powers to the wishes granted in The Monkey’s Paw, realising that his powers can help people, but they can frighten them away and that they give him unwanted publicity.

In The Sims 2 for consoles, when a player selects Search Couch while sitting on a sofa, he can find a “Mysterious Zombie Monkey Paw”. 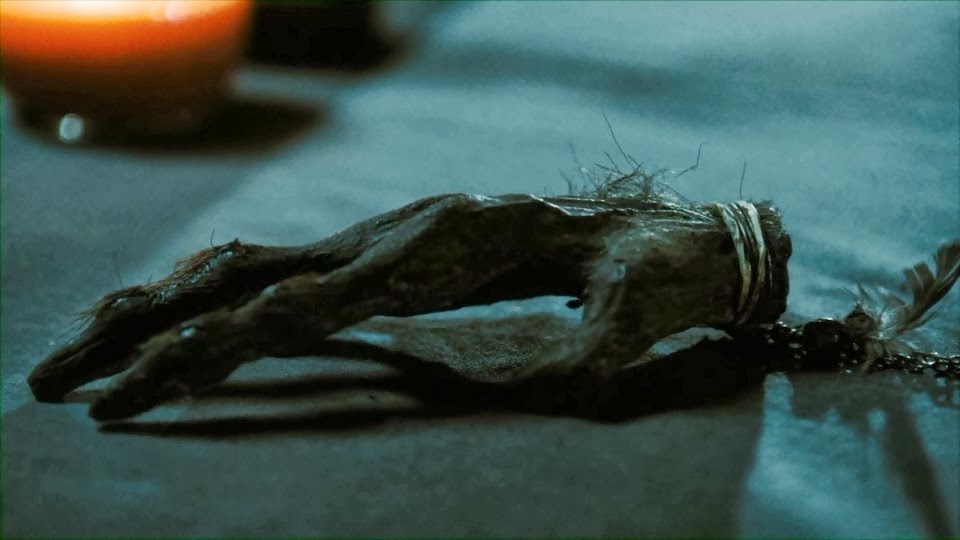 In the webcomic Saturday Morning Breakfast Cereal, the 4 August 2010 comic features a severed monkey’s paw that grants wishes with consequences.

In the novel adaptation of 1985 film The Goonies, there is a sequence of spooky stories told by the main characters, and Mouth recalls a story which Stef promptly identifies as The Monkey’s Paw. This sequence isn’t in the movie.

MOVIES and MANIA provides an independent aggregated range of previews, opinions and reviews from a wide variety of credited sources, plus our own reviews, in one handy web location. We rely solely on the very minor income generated by affiliate links and internet ads to stay online and expand. Please support us by not blocking ads on our site.