She apparently agreed to play the one-day part for $200 – but only if she didn’t have to say any dialogue. “Nobody’s ever gonna see this movie, it doesn’t matter,” she said.

Maila moved to the USA with her family when she was two years old and grew up in Ashtabula, Ohio. She and her family lived there until 1939, when they moved to Oregon. After high school she went to live in Los Angeles. She modeled for Alberto Vargas, Bernard of Hollywood, and Man Ray, gaining a foothold in the film industry with an uncredited role in the 1947 film, If Winter Comes.

On Broadway, she gained much attention after appearing in the horror-themed midnight show Spook Scandals, in which she screamed, fainted, lay in a coffin and seductively lurked about a mock cemetery. In the 1950s she supported herself mainly by posing for pin-up photos in men’s magazines such as Famous Models, Gala and Glamorous Models.

The idea for the Vampira character was born in 1953 when Nurmi attended a masquerade ball in a costume inspired by Morticia Addams in cartoons of Charles Addams. Her appearance with pale white skin and tight black dress caught the attention of television producer Hunt Stromberg, Jr., who hired her to host horror movies on the Los Angeles television station KABC-TV. The Vampira Show premiered on May 1, 1954.

Each show opened with Vampira gliding down a dark corridor flooded with dry-ice fog. At the end of her trance-like walk, the camera zoomed in on her face as she let out a piercing scream. She would then introduce (and mock) that evening’s film while reclining barefoot on a skull-encrusted Victorian couch. Her horror-related comedy antics included ghoulish puns and talking to her pet spider Rollo.

The show was an immediate hit, and in June 1954 she appeared as Vampira in a horror-themed comedy skit on The Red Skelton Show along with Bela Lugosi, Peter Lorre and Lon Chaney, Jr. That same week Life magazine ran an article on her.

She also ran as a candidate for ‘Night Mayor of Hollywood’ with a platform of “dead issues”. In another publicity stunt, she cruised around Hollywood in the back of a chauffeur-driven 1932 Packard touring car with the top down, where she sat, as Vampira, holding a black parasol.

When her KABC series was cancelled in 1955, Nurmi retained rights to the character of Vampira and took the show to a different Los Angeles TV station, KHJ-TV.

Clips from this show are included in the documentaries American Scary, Vampira: The Movie and Vampira and Me. She also appeared in Schlock! The Secret History of American Movies (2001).

In 1981, Nurmi was asked by KHJ-TV to revive her Vampira character for television. She worked closely with the producers of the new show but Nurmi eventually left the project because the station cast comedic actress Cassandra Peterson in the part without consulting her. “They eventually called me in to sign a contract and she was there”, Nurmi told Bizarre magazine in 2005. “They had hired her without asking me.”

Unable to continue using the name Vampira, the show was abruptly renamed Elvira’s Movie Macabre with Peterson playing the titular host. Nurmi later filed a lawsuit but the court eventually ruled in favour of Peterson, holding that “likeness means actual representation of another person’s appearance, and not simply close resemblance.”

Unlike Elvira, Nurmi authorised very few merchandising contracts for her Vampira character, though the name and likeness have been used unofficially by various companies since the 1950s.

In 1994, Nurmi authorized a Vampira model kit for Artomic Creations, and a pre-painted figurine from Bowen Designs in 2001. These sell for as much as $1,295.00 on eBay.com.

In 2004, she authorised merchandising of the Vampira character by Coffin Case, for the use on skate boards and guitar cases.

Also in 1994, Tim Burton’s film Ed Wood was released to critical acclaim with actress/model Lisa Marie in the role of Vampira.

On January 10, 2008, Nurmi died of natural causes at her home in Hollywood, aged 85. She was buried in the Griffith Lawn section of the Hollywood Forever Cemetery. 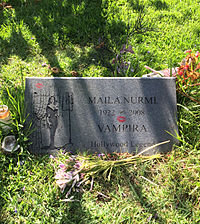 Disclaimer: This website includes affiliate links to Amazon and as an Amazon Associate the owner of this website earns a very minuscule amount from qualifying purchases.

MOVIES and MANIA provides an aggregated range of linked cult movie review quotes from a wide variety of sources in one handy web location, plus a growing number of our own reviews and ratings.

We are truly independent but rely solely on the very minor income generated by affiliate links and internet ads to stay online and expand. Please support us by not blocking ads on our site. Thank you. We really appreciate it.

This website uses cookies to improve your experience while you navigate through the website. Out of these cookies, the cookies that are categorized as necessary are stored on your browser as they are essential for the working of basic functionalities of the website. We also use third-party cookies that help us analyze and understand how you use this website. These cookies will be stored in your browser only with your consent. You also have the option to opt-out of these cookies. But opting out of some of these cookies may have an effect on your browsing experience.
Necessary Always Enabled
Necessary cookies are absolutely essential for the website to function properly. This category only includes cookies that ensures basic functionalities and security features of the website. These cookies do not store any personal information.
Non-necessary
Any cookies that may not be particularly necessary for the website to function and is used specifically to collect user personal data via analytics, ads, other embedded contents are termed as non-necessary cookies. It is mandatory to procure user consent prior to running these cookies on your website.
SAVE & ACCEPT